What's better than a Citadel Giant?

Here they are along with a slightly intimidated Marauder skeleton for scale. 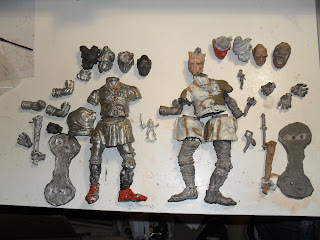 So I finally got my sweaty little mitts on my shiny new citadel Giant today, so I'm currently bouncing around like a kid on their birthday.

He's in great condition and all the bits are there, just requires stripping and a bit of TLC and he will be good to go.

Here's a quick pic. Unfortunately I'm working away until Friday, so i just have a crappy camera and a badly lit hotel room, but you get the idea :) 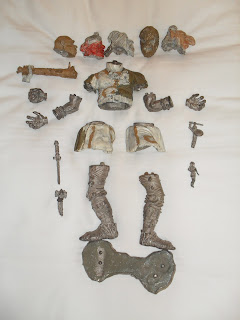 I'll hopefully get some more pictures when I get home, including some scale pics to show just how huge he is.
Posted by Skarsnik at 19:23 15 comments:

I bought myself the Citadel Giant on ebay.

I'm picking him up on Monday. Pics incoming then.
Posted by Skarsnik at 00:05 12 comments:

Bugger all since I last posted, although I did stick some magnets to the bottom of some 20mm bases, so I guess that almost counts as progress.

This seems to have been pretty well received, and has gained me some new followers to disappoint with my lack of painting. However, I'd love you guys to promote it in your much more popular blogs to get even more people signed up. The more people we get listed on there, the more likely you (and I) are to find an opponent nearby. If you want any more information listing in your entry, or if you have any suggestions for improvements, just let me know. Oh, and there is now a permanent link to it at the top of the blog.

I also did a big update of my 'haves' and 'wants' lists. The list of stuff that I have is pretty long, but if you want more details or pics of any of it, just let me know.

I arrived back from holiday at 2am this morning, and, having consumed copious amounts of Redbull to see me through the last part of a 1700 mile drive home from Sweden, found myself unable to sleep. After a quick catch up on all of your blogs (looks like you all went wishlist crazy while I was away!) and some prep work on my undead, I got to thinking about how I would find an opponent for some 3rd edition games when the army was finished.

I thought about this for a good long while before it struck me that I'd just been reading the blogs of lots of 3rd edition WFB fans, some or all of which would seemingly make great opponents if only they were close enough. Fortunately our good friends/evil enemies (dpending on your point of view) at Google had the perfect tool for finding out - Google Maps.

I created a map, and if you let me know the city/town/village that you live in, I'll add you to the map too (I'll be as vague as you want me to be with your location, I understand you might not want to reveal the location of your leadpile to a bunch of lead-crazed lunatics that you don't know), and put a permanent link to it on this blog somewhere.

For now, you can see me at the centre of the wargaming universe in Nottingham.

Not much hobby activity recently. I've had a manic time with work, and with the arrival of summer (or rather those 4 sunny days we call summer around these parts) my hobby motivation dwindled to pretty much zero. It didn't help that the figure sitting on my desk waiting to be painted didn't inspire me on little bit, so I put him aside and mused over the subject of what motivates me in the hobby, while drinking a beer. (A nice bottle of Fursty Ferret since you asked).

Then it hit me.

I've always been more of a gamer than a painter at heart, but the number of games I play is minimal due to not having a painted army. So what better motivation than getting an army painted with the sole intention of playing a game? Just a small one mind, this is me we're talking about!

So out came my 3rd edition Warhammer armies book, and after much deliberation I settled on undead. 1000 points of undead to be precise.

Another Fursty Ferret and some head scratching later and I came up with this:

Now, having not played a game of 3rd edition warhammer for almost 20 years, I don't know if that's a usable, or even legal army list, so if you spot any glaring errors please let me know.

My plan is to start painting when I return from my holiday at the end of June, and have it finished in 2 months. Then all I need to do is find an opponent.......
Posted by Skarsnik at 23:19 7 comments:

When is a druid not a druid?

When he's a warrior priest!

I wanted to paint Branowen the druid from the adventurer starter set, but due to the fact I was unlikely to ever need a druid figure for my wargaming, I decided to paint him as a warrior priest instead. I'm not 100% happy with a couple of areas on him, but right now it's about getting models finished, and I can always go back and touch things up later. I also really struggled to get a decent picture of him (especially his purple robes), but here you go. 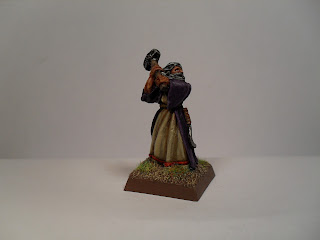 I used the new citadel paints on him, and overall I was really impressed. The base paints cover incredibly well, but don't suffer from being incredibly thick and drying way too quickly like the old foundation paints did. They also come in a much larger range of colours, so lots more choice which can only be a good thing.

The layer paints surprised me the most. I was expecting them to be the same formulation as the old citadel colour paints, but they are slightly thinner, and quite a bit less opaque. I found them really good for highlights, but when trying to paint a solid block of colour I needed an extra coat or two.

Shades worked pretty much as expected, and I couldn't see too much difference between them and the old washes. They didn't pool on the flat surfaces as much as washes, and found their way into the recesses more consistently, but they did seem to darken the raised areas more too.

I'm definitely a fan of the new range, and the massive increase in the number of colours can only be a good thing. I've read a lot about the new 'Citadel painting system' being a terrible thing which will stifle creativity and force people to paint in a certain way, but it strikes me as being a great system for beginners to learn with, and as they get more experienced they will find new ways to use the paints just like painters always have. As for anyone who is already an experienced painter, I'm pretty sure the Games Workshop painting police won't be knocking on your door if you don't use the paints how they want you to.

My next project is a group of 5 ghouls. I need to find faster ways of painting larger numbers of troops, and so I'll be using them as an experiment with 'dip'. I've seen some really great models done using dip, but also some really terrible ones, and I'll be hoping I can come up with something that fits into the former category.
Posted by Skarsnik at 21:24 3 comments:

Skarsnik
I'm a 34 year old child with a fascination for toy soldiers. I have a huge lead pile, and it's time I got some of it painted.